On our third day on Bora Bora, we were picked up at the St. Regis dock by Will from Bora Bora Romantic Tours.  I had scheduled a few weeks in advance a full day private tour on a motor boat that would take us around the entire lagoon with stops for snorkeling, feeding stingrays and a swim with sharks.  P.S. Be sure to book this far in advance – I did it about 6 weeks in advance and they only had one day available left for the private tour during our 4-day stay.  The day would also include a stop on a private uninhabited island for a BBQ lunch with champagne.  I took so many pictures this day that I’m focusing on the private motu lunch and lagoon pics and will post separately on the shark swim and stingrays.

Will met us at the hotel dock at 9am sharp and we were off, speeding across the lagoon.  This gave us a great opportunity to see the island from different angles and to get a gander at some of the other resorts.  I have to say that I think the Four Seasons, St. Regis and Le Meridian have the best views of Mount Otemanu but the decks on the Le Meridian’s OWBs were significantly smaller.  Also, the newest resort on the island, the Conrad, had some amazing looking OWBs with huge plunge pools but it only faced the lagoon (no Mount Otemanu views) but it faced west so it gets the best sunsets according to our guide.  Just something to keep in mind if you’re looking at different resorts.

Our guide took us to a great snorkel spot for coral, fish and moray eels (so scary!) and then on to see and feed stingrays and then he took us outside the reef to snorkel in deeper water (about 50 feet) with black tip reef sharks and lemon sharks.  After all that activity, we were ready for lunch and he took us to Motu Haapiti, which is apparently owned by an eccentric Frenchman who lives in Tahiti and leases it to the tour company for private lunches. 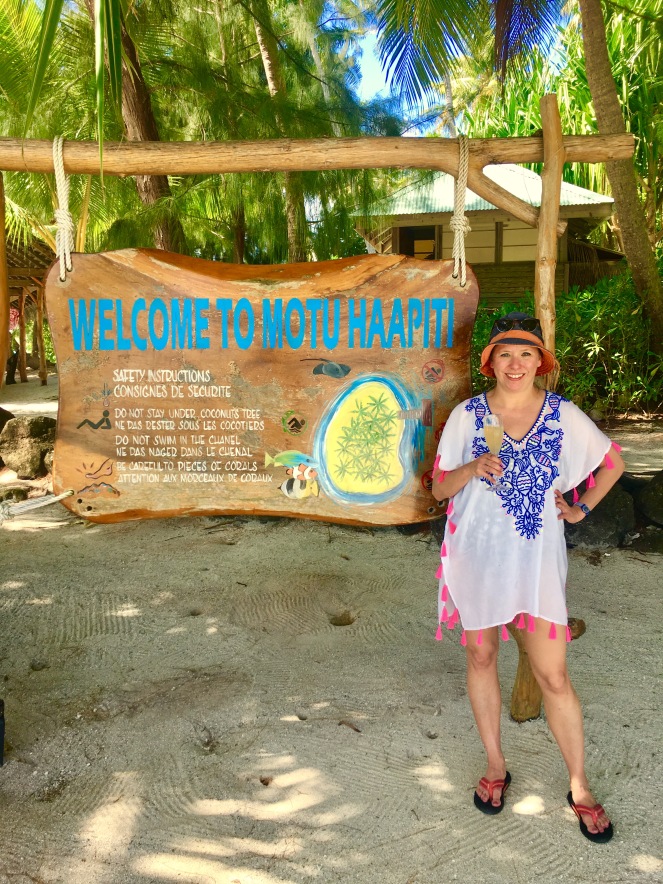 Our guide gave us some ice cold beers and we wandered the property, checking out its different beaches, coconut grove and the few ramshackle structures that remained on it (apparently said Frenchman used to live on it but abandoned it years ago).  The shallow lagoon and palm trees on this Motu were an endless supply of screensaver worthy photo ops. 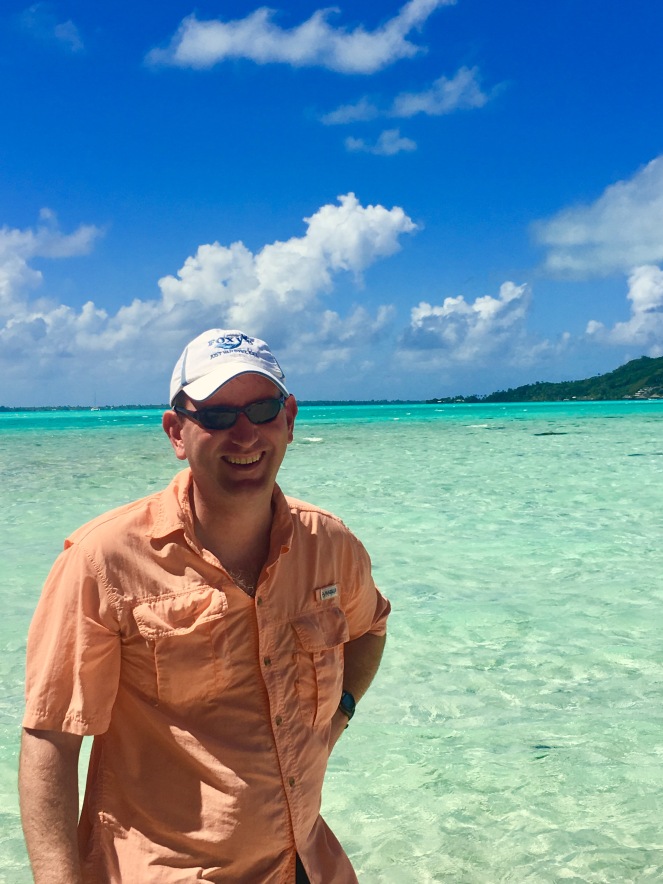 We finally wandered back and Will had the BBQ going and the champagne on ice! 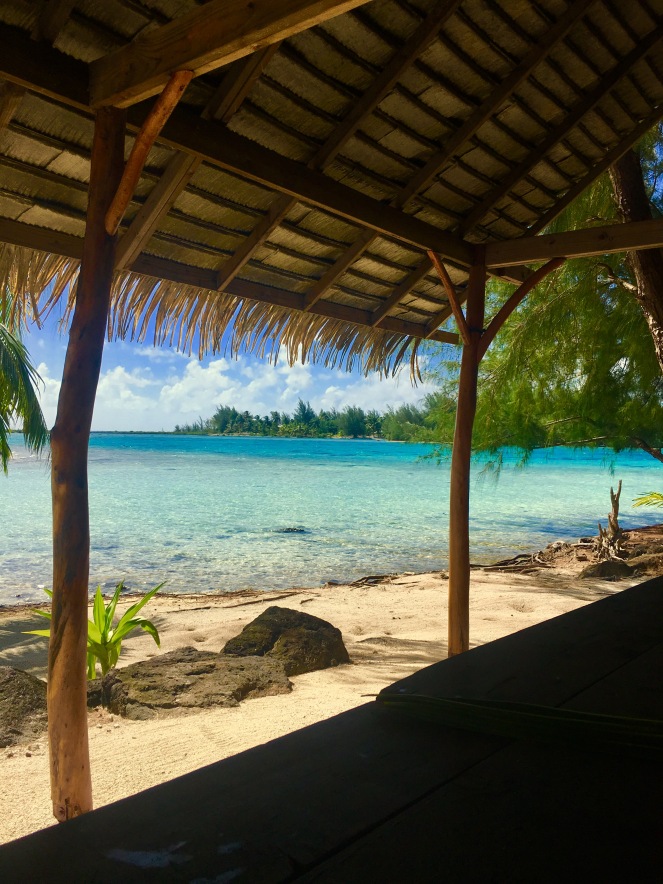 As the grill heated up, he went and found a fallen coconut and showed me and Steve how to get the shell/husk off and then how to crack it open with a machete.

We sat there and drank the fresh coconut water inside of it which was incredible and so fresh.

He opened a few more coconuts and shaved the coconut out of them and put the shavings into cheesecloth in order to squeeze out the coconut milk.  He mixed it together with fresh tuna, chopped veggies, lime juice and salt & pepper for a fresh made poisson cru which was incredible.

Steve and I opened the champagne and sipped bubbly while snacking on the tuna dish and relaxing.  He grilled up veggies, shrimp skewers, marinated ribeye steaks and marinated chicken, which was all delicious.  We had quite a few leftovers which he boxed up for us but we told him to take it home to his friends and family.

Afterwards, Steve and I finished our champagne on our private motu beach while Will finished up (and ate his lunch!) until we were all packed up and ready to go.

It really was a magical spot for lunch and the views of the lagoon and island on the way back towards the St. Regis were just incredible.  This goes down as one of my favorite meals – it wasn’t the best food I’ve ever had but the location, the company and the uniqueness of the experience was unforgettable and so special.

I highly recommend Bora Bora Romantic Tours for a group or private day trip as they do both.  Obviously, the private tour with champagne is the more expensive option but we decided we would rather do one big grand-slam perfect day rather than several group tours and we were so glad that we did.  After seeing a few of the large tour groups packed on boats with screaming kids, we knew we made the right choice.  Our tour guide was also very sweet (and not bad looking if I do say so myself) and he explained so much about the island, the marine life and local customs to us as well.

To top it off, could the weather have been any more beautiful this day?  Sigh….. 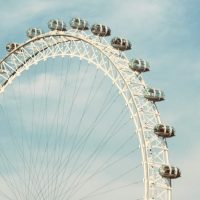